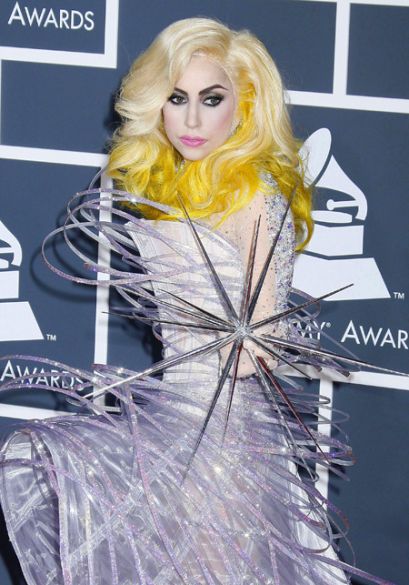 At first I must have ignored Lady Gaga’s popularity as an artist until it became obvious a few months ago she’s one of the most influencial people in performance, music and fashion at the moment (even to the world according to Time May 2010 Time 100). At the moment many fans and artists use Lady Gaga as inspiration for creating their own style. For example: Lady Gaga combines several (known) styles in her performance art video’s and clips: she dresses extravagant, sexy, uses all kinds of fashion accessories, Bling-bling (diamonds and sparkling jewelery), extreme makeup, masks, Gothic subculture, spiritual symbols, new wave, avant-garde and Electropop. On sites about Lady Gaga it is said she’s influenced by Marc Bolan, David Bowie (both artist in the Glam Rock genre), also Queen, Madonna and Michael Jackson are mentioned as wel as Deepak Chopra in het Times interview, her dress-style is a tribute to Andy Warhol known from his pop-art.

OK this was only my introduction to my point: Lady Gaga to me is an example of an even bigger Fusion-trend in music and fashion using popular items and concepts from the past. The fact Lady Gaga is the most downloaded artist on YouTube (almost 213,000,000 times at the moment for the Bad Romance Video). This specific Lady Gaga video has some common elements with the classic 1982 Thriller videoclip by Michael jackson (13.42 min.); the supernatural, zombie-like creatures, the crawling dance, the world in a world, and struggle for power.

The interesting part about the designs is the link to cultural, cult and fashion-trends. It’s very loose and therefore adaptive, which means anybody can join in and reuse the ideas to their own like. Lady Gaga created a movement, a tribal sphere of creatives who are inspired to create their own style. She’s a catalist for style innovation and that’s why she’s setting a trend.

Update June 10:
I just watched the new Alejandro video (Also see YouTube) via the official Lady Gaga website. Well produced but maybe a bit too much erotic and less Gaga style what we know her for. Some interesting new dance-moves to say the least. The eroticism might just be interpreted as a selling tool like Madonna once did but with the difference that it had been done before: is she going for easy publicity? Sure sex sells but is she going mainstream and follow Madonna’s path (Gaga even uses similar religious symbols) now that we can see her real face in the video? Is she testing her public? Suggestions and rumors about Lady Gaga posing nude for Playboy are getting heavier and Gaga seems to explore this medium as a way of expression. Below the quotes from Popcrunch.com:

“No-one wants her to do it. Her business people are trying to convince her that it could be seen as being a bit lowbrow and cheesy, and will alienate her fans who like her edgy appeal,” says a spying Bunny close to the rumored Playboy deal. “She thinks it will be an experience, and she’s always looking to grow as an artist. She doesn’t think there’s anything distasteful about it. She sees it as just another form of expression.”

The source squeals: “She’s been chatting with everyone about it all week. She’s always been a fan of Hugh Hefner’s, and his whole sex-as-art kind of thing. She’s always looking to shock and entertain, and something like this would be perfect for her. She wants her shoot to be like nothing Playboy has every seen before. If she doesn’t drop it, her nude shoot will be like nothing Playboy has ever seen!”

We shouldn’t forget Lady Gaga is an artist trying to explore (and maybe exploit) every medium and channel to the fullest. The challenge is to continue and top the teasing-climax after publication. What is the next level after full exposure? What if Gaga’s erotic videoclips are reduced (in the public minds eye) to a teaser for her posing nude for Playboy? Can she continue to make other (new) forms of visual satisfaction? What new performance dimensions will she explore or develop? Will her “little monsters” (as she calls her fans) stand by her and support her in her exploration at the edge, in nudity expression? Does she dissociate from her fans and cross a point of no return? She is playing with fire since the public expects something extraordinary; an ordinary nude beach-shoot for Lady Gaga would probably be considered artistic suicide.
I sincerely hope Lady Gaga will continue to explore her creative expression as an artist and not reduce herself to just another Playmate or Playboy-Bunny.
[Will probably be continued]

Be the first to comment on "Trend Fusion Artist Lady Gaga"