Early in my Meta-research about problem solving, education and thinking styles I discovered the “Six Thinking Hats” method in a book by Dr.  Edward de Bono (1985) . The method is best described as a framework for thinking.
I found these images online which give the general idea about the 6 color hats: 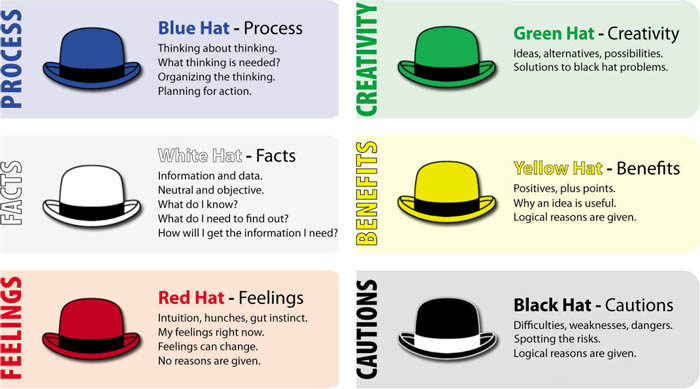 The premise of the method is that the human brain thinks in a number of distinct ways which can be identified, deliberately accessed and hence planned for use in a structured way allowing one to develop strategies for thinking about particular issues. Dr de Bono identifies six distinct states in which the brain can be “sensitised”. In each of these states the brain will identify and bring into conscious thought certain aspects of issues being considered (e.g. gut instinct, pessimistic judgment, neutral facts).

A compelling example presented is sensitivity to “mismatch” stimuli. This is presented as a valuable survival instinct, because, in the natural world, the thing that is out of the ordinary may well be dangerous. This state is identified as the root of negative judgment and critical thinking.

Six distinct states are identified and assigned a color:

Coloured hats are used as metaphors for each state. Switching to a state is symbolized by the act of putting on a coloured hat, either literally or metaphorically. These metaphors allow for more complete and elaborate segregation of the states than the preconceptions inherent in people’s current language. All of these thinking hats help for thinking more deeply. The six thinking hats indicate problems and solutions about an idea or a product you might come up with. Furthermore, Dr de Bono asserts that these states are associated with distinct chemical states of the brain — however, no details or evidence of this are presented.
[End of Quote]

The most interesting part for me is the fact that it adds a meta-level to your thinking in an easy non-offensive way. You could even do it with kids by adding a some role-playing elements to discussions or problem solving. It defines the rules of the game. Knowing that you can classify your (color of) thinking and (by changing your hat-color) can change your approach and perception is very valuable. The Thinkings Hats defines a structural approach and can be used in many situations , but especially when you seem stuck or primarily negative.